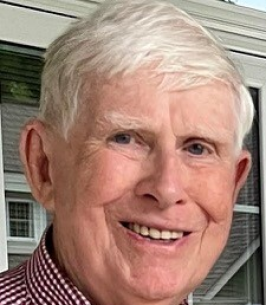 Frederick R. Smith, 93, Professor of Education at Indiana University for 34 years prior to his retirement in 1994, was born in Lynn, Massachusetts, on September 19, 1929. He was the son of Frederick R. Smith Sr. and Margaret (Donovan) Smith. Fred had three sisters, older sister Marion, and younger sisters Marjorie who survives and lives in Burlington, MA; and Carol, who passed away of Leukemia at eight years of age.
His high school career found him as a member of a winning football team at Lynn Classical High School. A trip to Miami, FL on Christmas Eve 1947 where Lynn Classical defeated Granby High School of VA led to an athletic scholarship to Duke University in Durham, NC. He graduated in 1951 with a BA in Social Science. During the Korean War, Fred enlisted in the United States Air Force. He was a Distinguished Graduate of the Officer Candidate School and assigned to the Strategic Air Command.
Returning to civilian life in 1953, Fred enrolled in Boston University as a graduate student in Secondary Education specializing in Social Studies Teaching. He graduated with a M.Ed. in August 1954 the same month he was married to Patricia Barry Smith who survives him. After their marriage on August 28, 1954, they left Lynn to teach in high schools in Jackson, MI. Fred then enrolled in the University of Michigan Rackham School of Graduate Studies where he received a Ph.D. in Education in January, 1961. Fred joined Indiana University School of Education faculty in September 1961.
Family was always the center of Fred’s life with Pat and his three sons, Brian Patrick Smith, wife Peggy Duchon Smith, children Kelly (Zach Cunningham) and Kevin (Chelsea Grimme); Barry Frederick Smith, wife Penny Lampros, daughter Sophia Lampros Smith; and Brendan Edmund Smith, wife Katherine Harrison Smith, children Robby and Ellie, all of whom survive him. In August, his first great-grandchild Margo Cunningham was born. This brought him great happiness.
Fred and Pat met on the beach in Lynn Massachusetts. They had a special relationship and rarely seen apart. Fred was extremely proud of his wife’s accomplishments as an educator, mother, and loving spouse. They enjoyed family, travelling, IU Sports and their involvement in the Bloomington and Meadowood communities.
Fred followed his sons’ interests while they were students at Bloomington South and continued as he followed his grandchildren’s sports and academic activities. Fred enjoyed gardening and raising beautiful flowers. He transferred this love of gardening to Meadowood Retirement Community when Pat and Fred moved there in 2014.
Fred was listed in “Who’s Who in American Education,” and he authored prize-winning books in Education and Social Studies. As a Full Professor at Indiana University, he served the University in many capacities- including stints as Program and Department chair, Associate Dean, School of Education, as well as several years at the IU Foundation. He was also Development Director of the School of Education building from which he retired in 1995 after 34 years as a professor.
Fred served the Bloomington community and St. Paul’s Catholic Center in many ways. He was a member of the Board of the Monroe County YMCA, an Overseer of the St. Meinrad School of Theology and Seminary, a member of the Bloomington Park and Recreation Foundation Board, President of the Indiana Council for Social Studies Teachers as well as a recipient of its special service award.
A founding member of St. Paul’s Catholic Church, Fred served as Eucharistic Minister for homebound persons and for patients at Bloomington Hospital. He managed one major capital campaign, served as a committee member on another, and has recently completed two terms on the Parish Council.
A visitation will be held for Fred on Friday November 18 from 10:30 AM – 12:30 PM at The Funeral Chapel of Powell and Deckard, followed by a Mass of Christian Burial at St. Paul Catholic Center at 1:00 PM. Committal with military honors at Valhalla Memory Gardens will be private. Memories of Fred and online condolences may be sent to the family at www.thefuneralchapel.net.
The family would like to thank the many care givers that Fred had over the past six weeks. This includes the terrific nurses and doctors at IU Health Bloomington Hospital and the Hospice House. Special thanks to Dr. Brad Bomba Jr. for his care and support as well as Ann and Katie at the Hospice House.
In lieu of flowers, memorial contributions may be made to the IU Hospice House, c/o IU Health Foundation, P.O. Box 775589, Chicago, IL 60677.