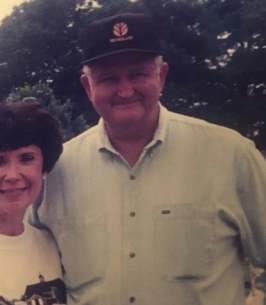 Carthell met the Lord in his home November 13, 2022 with wife, Peggy, and Jake Bartlett. His passing was due to unexpected natural causes. The compassion of Monroe Fire District Station 21 Firefighters, EMT’s, Deputy Sheriff, Coroner, and Eric Powell was an amazing blessing and made his departure so much easier.

Carthell was born May 16, 1941 in a rural home in Washington County Florida. As a child he loved walking barefoot to a one room school house until the family moved to Chipley. Serving his Lord, his country, helping others, pursuing education and exploring the countryside were the center of his life. At the age of eight he started picking watermelon, cotton and peanuts and delivered newspapers to earn money for his educational needs and helping his family with expenses. Working daily at various jobs still gave him time to participate in school activities. He graduated from Washington County High School in 1959. The relationships with his classmates and teachers were always cherished. When possible, he loved going to Chipley for homecoming and spending time with his family and his childhood friends. He became a member of the Chipley Baptist Church and enjoyed singing in the choir and being in the youth group. His senior year he met Peggy the first day of school due to her father’s job transferring him to Chipley.

Carthell left Chipley the day he graduated to work on the pipeline then joined the Air Force to serve his country, get his college education and see the world. His years of duty included service in Japan, Germany, Thailand, The Netherlands, deploying to various war zones, and numerous stateside bases. He was an adventurous man in the military, racing dirt bikes, playing tennis, golf, football, hiking, basketball and track. He wanted to be a helicopter pilot because he wanted to help his military family in rescues. He passed all the requirements with flying colors, but Peggy persuaded him they could spend more time together helping others in the Air Force. In the Air Force he received numerous medals, denied medals, felt undeserving of medals, but loved giving his medals to special needs children.

He hosted and worshiped with missionaries from around the world. Corrie ten Boon, Edith Schaffer, children and grandchildren of Gladys Alyward, CY and Patricia Kim, Patrick & Denise Tolbert, Indonesian missionaries, survivors of the holocaust who ministered around the world, and medical missionaries.

Due to his devotion to Peggy’s parents (Price and Irene Owings), his desire to get his Bachelor's degree at I.U. and to live in a rural community again (Smithville, Indiana) became their home in 1980. The Robert Jacob’s Family sold the family farm to him in 1989. Richard, Tom, Jake & Matt Bartlett and Elijah Lawson’s help enabled him to stay on the farm he loved.

Carthell was involved with Indiana University for 30 years. He taught classes before he obtained his degree. He received his BS degree, teaching all over the world. He was accepted in the masters program but was unable to complete the requirements due to extensive traveling for I.U.

His desire to meet and help international faculty, students, scholars and their families was forever in his heart. They came to the farm and mowed, gardened, painted, helped with the animals and helped with events. Weddings, baby showers, holiday events, Bible studies and baptism celebrations were held at the farm. His family in Bloomington blessed him beyond measure. Some will be together this year for a Thanksgiving celebration in the barnhome he remodeled. Two dear ones are traveling from Seattle, Washington. Another celebration of his life will be held in the spring.