To share your memory on the wall of Dr. James E. Mumford, sign in using one of the following options:

Provide comfort for the family by sending flowers or planting a tree in memory of Dr. James E. Mumford

Born in Kinston, North Carolina, Mumford was an academic prodigy. Along with his twin brother, Mumford was babysat by his aunt, a teacher in a one-room schoolhouse outside of town. During that time, he absorbed the lessons and instruction provided. By the time Mumford entered school in Kinston, he was so far ahead of his peers that he skipped ahead several grades, eventually attending college at Virginia State University at the age of 15.

Mumford began his teaching career at a small high school in Centreville, Maryland, where some of his students surpassed him in terms of age. From there, Mumford taught in Camden, New Jersey, just outside of Philadelphia. His choir at Camden High School would receive widespread recognition under Mumford’s leadership.

A classmate from Virginia State who went on to teach at IU—Dr. Michael Gordon, a retired professor at IU’s Jacobs School of Music, Dean of Students, and the first director of the African American Choral Ensemble—suggested that Mumford pursue his Ph.D. at IU Bloomington. Mumford followed that advice and later graduated from the IU Jacobs School of Music with a Ph.D. in music education and minors in voice and ethnomusicology.

Mumford’s work with the African American Arts Institute began in 1976 when he served as vocal coach for the IU Soul Revue under director Portia K. Maultsby. In 1980, Mumford took over as director of the IU Soul Revue. In 1983, while completing his final year as Soul Revue director, he became director of the African American Choral Ensemble and continued in that role until his retirement in 2006. During his tenure as director, the choral ensemble premiered Mumford’s compositions, “Let My People Go” and S.T. - Sojourner Truth: Choral Portraits.

Recognized as a “Master Teacher,” Mumford was named a recipient of IU’s prestigious Faculty Colloquium on Excellence in Teaching (FACET) Award in 1993. Other notable distinctions include the Bloomington Martin Luther King, Jr. Legacy Award in 2006 and the 2006 Groups Scholars Program Lifetime Achievement Award. Mumford is a proud member of Omega Psi Phi Fraternity, Incorporated.

The Memorial Service for Dr. James E. Mumford will be held at on Monday April 29th at 1PM at Sherwood Oaks Christian Church.
Read Less

We encourage you to share your most beloved memories of Dr. James E. here, so that the family and other loved ones can always see it. You can upload cherished photographs, or share your favorite stories, and can even comment on those shared by others.

Posted Apr 08, 2020 at 10:20pm
Dr Mumford you are still missed. Home with Christine avoiding the Covid-19 virus I practice my music and think of you. I watch Netflix and the "the giants" Miles Davis, Etta James, Quincy Jones, and I think of you. You shaped so many young lives, I am blessed to have been one of them.
Comment Share
Share via:
JM

Posted Apr 29, 2019 at 08:58pm
To a great man, teacher and mentor. U will truly be missed. Thank u for everything. GOD'S Angels are singing and harmonizing ask I speak.
Comment Share
Share via:
Posted Apr 29, 2019 at 10:23am
Doc, I am one of many of your daughters! You are loved and will be missed. My condolences to the family. My prayers are with you. - Sincerely, Lynette Hiser , AACE and SoJourner!
Comment Share
Share via:
HD

Posted Apr 25, 2019 at 09:13am
It is always a privilege to know someone as great as you James. It has been my privilege to have known you for 42 yrs. The MAC will never be the same. You will be forever be missed. With great respect and admiration. H.
Comment Share
Share via:
RA 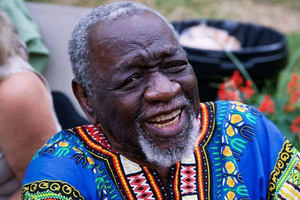