To share your memory on the wall of Joyce Carlile, sign in using one of the following options:

We encourage you to share your most beloved memories of Joyce here, so that the family and other loved ones can always see it. You can upload cherished photographs, or share your favorite stories, and can even comment on those shared by others.

Posted Nov 10, 2020 at 05:14pm
To Joyce's Family,
We send you our heart-felt sympathy at Joyce's death. She was so fortunate to have each of you and Keith as her family. It was always a joy to see her in church and share a few words, even in her later years.
May you have the comfort that Jesus promises to all who mourn.
Sincerely,
Nancy and Chuck Macklin
Comment Share
Share via: 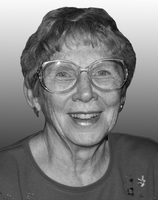