To share your memory on the wall of Billy Eugene Rhoades, sign in using one of the following options:

Print
Billy Eugene Rhoades, 92, of Bloomington, went to be with The Lord on Friday, May 7, 2021. He was born September 27, 1928 in Lima, Ohio to Fern Pickering and Raymond G. Rhoades. He graduated from Lima Central High School in 1946 and served two years ... Read More
Billy Eugene Rhoades, 92, of Bloomington, went to be with The Lord on Friday, May 7, 2021. He was born September 27, 1928 in Lima, Ohio to Fern Pickering and Raymond G. Rhoades. He graduated from Lima Central High School in 1946 and served two years as a bandsman (saxophone) in the Army. He played both the baritone saxophone and piano, and these God-given skills lead to his meeting and then marrying his wife, Mary Lou. From 1948 until 1951, he attended Ohio Northern University, graduating with distinction, a major in mathematics and a minor in physics.
After two years at Rutgers (M.S. in mathematics, 1953), he began teaching full time at Lafayette College and simultaneously working for his Pd.D. from Lehigh University. Billy received his doctoral degree in 1958 under the direction of A. Wilansky. He remained at Lafayette College as an Assistant Professor until 1965. During this period, Billy became increasingly involved in Mathematics Education, an interest that has continued throughout his career. From 1963 to 1965, he was granted leave of absence from Lafayette College to serve as the Associate Director (and subsequently, as Director) of the Committee on the Undergraduate Program in Mathematics (CUPM) in Berkley, CA, which was a powerful force in mathematics education reform for many years.
After a two-year assignment with CUPM, Billy accepted a teaching position with Indiana University – Bloomington, leading to a tenured status in the Mathematics Department. While in Indiana, Billy associated himself closely with all aspects of pedagogy and mathematics education. He was assistant chairman for undergraduate affairs, and took charge of T.A.’s (=A.I.’s) for some time. He coordinated the dialogue between the Mathematics Department and the Education School. He supervised the Master of Arts in Teaching program during his entire career at Indiana. At the same time, Billy remained active outside the university on committees and panels, speaking widely on mathematics education to sectional meetings of the Mathematical Association of America and the National Council of Teachers. He was the Director of the Academic Year Institutes program sponsored by the National Science Foundation, and he served as Director of the Institutes for Negro College Teachers from 1969 to 1970.
Teaching was only part of his professional life. Bill has remained active as a research mathematician, and he had recently traveled as a Fulbright Fellow to Hungary and Nigeria. He has published over 150 papers, mainly in his fields of Summability and Fixed Point Theory. He had a remarkably meticulous filing system stored on 3x5 note cards. Every Wednesday afternoon, Billy could be seen in the Swain Hall Library pouring over journals, updating the cards, cross-referencing the information. He was generous in sharing that information with others, and he was especially keen to encourage younger colleagues at institutions which lack the fine library facilities that we enjoy at Indiana. Often when Bill has traveled to other institutions he could be seen leaving Bloomington with a stack of cards many inches thick.
Billy was a master of classical Summability Theory. Some years ago when Paul Halmos was giving a popular (for mathematicians!) talk on Matices I Have Met, Paul raised the question: Does the Cesaro matrix have a square root? It was a typical Halmos puzzle --- simple to state, but irritatingly unknown to the audience. Billy, using his vast knowledge of Summability Theory, easily showed the answer was yes, and was able to describe explicitly the square root.
In 1972, Bill took a year’s sabbatical with his family, spending the first half near Stuttgart, Germany, with Fellowship support. The last half was in Tel Aviv, Israel, holding a faculty research position. Touring the Holy Land gave the family lasting memories, and produced multiple slide carousels of Bill’s pictures.
Billy was not just involved with the university; he was also an active member for many years in the United Presbyterian Church in Bloomington, serving on the synod and as an elder. He was an avid tennis player, and loved sports of all kinds. For many years, he had tickets to IU basketball, football, and soccer.
He has made Bloomington his home for over 50 years with his wife, Mary Lou. He married her on August 25, 1949 and she survives. They raised their two children here, Mary Fern and Raymond. Mary fern preceded her father in death in 2019. Raymond married Martha and had two children, Paul and Carolyn; and they all survive. He was also preceded in death by his two brothers, Robert and Raymond Rhoades.
Bill will be remembered as a man of integrity, loved by his wife and family, respected by his colleagues worldwide, and believing on the sure promises of God which are Yea and Amen in Christ.
The family has chosen cremation with no services at this time. Memorial contributions may be made to the general fund of United Presbyterian Church, 1701 E 2nd St, Bloomington, IN 47401, in memory of Billy. Arrangements are entrusted to The Funeral Chapel of Powell and Deckard.
Read Less

We encourage you to share your most beloved memories of Billy Eugene here, so that the family and other loved ones can always see it. You can upload cherished photographs, or share your favorite stories, and can even comment on those shared by others.

Posted Jun 05, 2021 at 03:12am
During my doctoral studies at IU (1968-74), I never had a course from Billy Rhoades, but I was impressed with his teaching style. Later on, we often met at the math meetings due to common interest in math education and history of mathematics. He always has a smile. Smile you way to your Lord, Billy!
Comment Share
Share via: 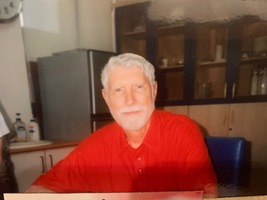